Camping La Soubeyranne
Gard (30)
Beyranne, at the ‘Soubeyranne’ Campsite in South France (Near Avignon, in Provence)
Who remembers still the Beyranne water? Water full of power and magic that can no longer be found.
A mouthful of Beyranne would speed up the mental intellect of the lucky taster.
No more short days and impossible mental maths. A shot of Beyranne and everything was possible.
“Those Romans who only wanted war and bring peace to Gaul would have never been able to build the Pont du Gard (Roman aqueduct) if they hadn’t been given a bottle of Beyranne…. » Grumbled Carabouille reluctantly. Well, it was to protect their precious water that the locals built, exactly where the stream started, the fortress of the ‘Source Beyranne’. The Fortress eventually got named “Soubeyranne”, because of drinking too much of it and saying it too quickly …. 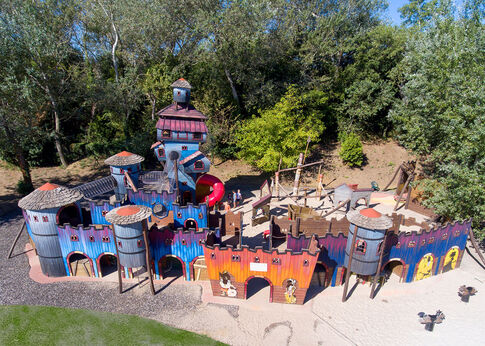